So this is a project from back in January that has become a bit of a distraction (in addition to the usual life distractions) which has slowed our house progress and of course this post!

We had one of these tvs for the last 10 years and before that I had actually inherited it from my grandmother… So you could say its a family heirloom! 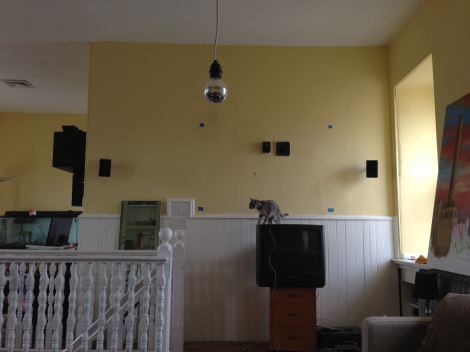 The kitten helps give you a sense of scale for our old box set. Luckily we never watch much TV, just the occasional movie, so we didn’t have to squint at it that often… But recently the picture has been staticky so it was time to finally upgrade:

Since we didn’t want to go too crazy, we only upgraded to a 60″, which doesn’t look too bad on this wall.

We did the usual wall mount. (Buy them on line… So much cheaper than the big box stores).

And you may remember from way back in 2009 we had planned ahead for this. We ran conduit inside the walls before insulating them to hide all the wires and cords away. One 2.5″ conduit to the TV:

And another conduit over to our computer, for streaming movies and music off of the computer. Though there is a lot less need for this one today with all the Smart TV stuff, but who knew in 2009…

They both run to a new AV cabinet that we built underneath one of the window sills.

We also ran power, cable, network, and a ton of speaker wire into the cabinet. We wired for surround sound in the TV area, the office area, and on the deck. They all then feed into a switcher so we can chose which zones should be on.

Some adjustable shelves and all the equipment hooked up and we have a working AV cabinet! At some point we will be building doors to match the paneling, so all of this will be completely covered up.

All of the wires that have been dangling out of the walls & ceiling got speakers to cover them up… finally.

But for the final step we had to figure out to control all this stuff, with most of it concealed behind doors. Well Harmony makes a cool little puck that you control through your network and it has an IR blaster to control all the equipment. Then you can simply control everything through your phone

So here is the full setup all ready to enjoy.

The TV itself is a Samsung which we picked partially for all its Smart TV features and built in camera. And not to delve into the long debate… but we picked a plasma over LED. It also has voice commands, motion control, 3D glasses, App Store, etc.

You really don’t need cable since you can do so much on-line with these TVs. The first thing we did was to hook it up to the internet and only later connected the cable. 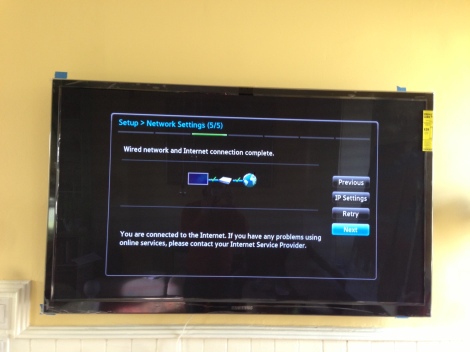 If you can hardwire your network rather than using wireless…do it. It makes streaming instantaneous. When we rewired the house in 2009 and had the walls open, we ran Cat5e all over the place all going back to our main router on the 1st floor so our TV plugs right into the network. We did end up adding another little switch in our AV cabinet since so many of the devices want Internet.

So with the built-in camera it makes it easy to Skype when someone cannot make the family movie marathon… though I don’t know what Kelly’s mom is doing to her sister in this picture?

So if you will excuse us we have some movies to watch!