History of the Room/ What we’ve done so far/ what we plan to do:

The living room is rather large compared to other homes on the block because it was expanded north into the back yard during the 1900 renovation. (great for gaining interior space, but this effectively eliminated our backyard) After that renovation, there was a large stained glass bow window on the north end of the room, a south window overlooking the garden, and a large western window overlooking our neighbors yard. There’s also lovely tiled chimney-less fireplace; we found evidence of an electric switch in the surround that must have turned on a gas insert and a large pipe that probably vented it to the neighbors yard. When we moved in, the original wood floors were still there and recently refinished, but the fireplace mantel had been replaced with wood and all but the garden window had been closed up and drywalled over. A closet was added in the 1960’s or 70’s, and a door separated the room from the entry, leaving the long deep room cut off from the dining room and kitchen and rather dark – more like an office or bedroom rather than a living room. 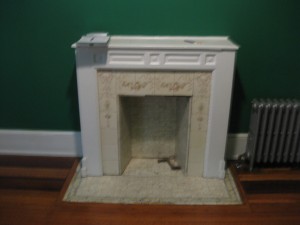 Before we moved in, we decided to modernize the floor plan to create a better flow. The first decision was to create an opening between the living room and kitchen, which immediately allowed for borrowed light from the kitchen to pour into the dark north side of the living room. We also chose to add a half-bath, built in credenza, and coat closet along the north end of the living room. We reopened the western window, which now falls in our half bath, and rebuilt the interior of the bow window with the intention of designing a new stained glass window. We’re in the process of stripping & refinishing the fireplace and added a travertine mantel to match the top of our new credenza and, eventually will add a ventless gas insert. This room is going to have stained trim/baseboard in the original profile instead of the painted trim throughout the rest of the house. 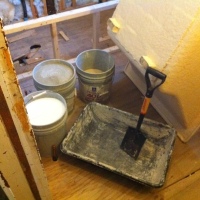